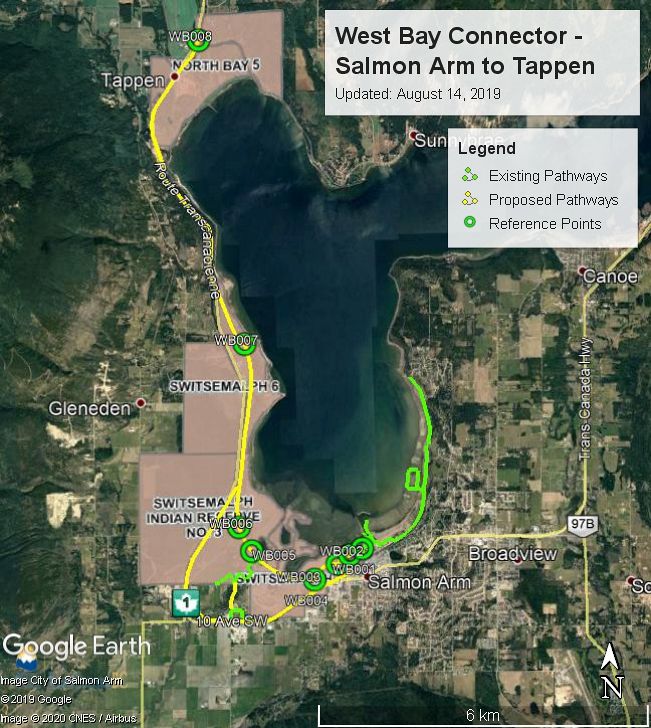 The Shuswap, British Columbia, Secwepemc Territory - A safe connection between the City of Salmon Arm and neighbouring Indigenous band lands takes a giant leap forward with the signing of a memorandum of understanding on the West Bay Connector Trail in January.

An agreement to work collaboratively has been made by members of the West Bay Trail Working Group, which is comprised of the Neskonlith Band, Adams Lake Band, City of Salmon Arm, Columbia Shuswap Regional District, Interior Health, CP Rail, the MLA, the MP, Province of BC, Switzmalph Cultural Society and the Shuswap Trail Alliance.

That commitment to construct a walkway from the Salmon Arm Bay to Tappen, is supported by the Little Shuswap Lake Indian Band and will be set in ink when officials with the City of Salmon Arm, Neskonlith and Adams Lake Indian Band meet at Pierre’s Point January 31 to sign the memorandum of understanding.

Kukpi7 (Chief) Clifford Arnouse of the Adams Lake Indian Band, when asked what the project meant to him, said “Lots of good health benefits and safety for our people as well as connecting to our cultural things and bringing people together in the outdoors. Not only locally but internationally which is great. Cultural names and place names will be used which will get our story out with more facts. We can show the environment and how we are trying to look after it as naturally as we can”.

Kukpi7 Judy Wilson, of the Neskonlith Indian Band, acknowledges and supports the decades of work those who have championed the regional trails and safety for our communities. The trail signifies the building of connections between our communities and provides a safer pathway for work, school, shopping, exercising and getting outdoors. The salmon arm delta is one of the pristine and key habitat areas for birds, animals, aquatic plants and fisheries.

The signing helps realize a 40-year dream held by Neskonlith elder Louis Thomas, a dream that was embraced by Shuswap Trail Alliance 15 years ago.

When asked what this project meant to him Louis responded that, “I hope that maybe this time it’s a success, I’ve working for so many years all about the safety for our people. To me it’s about all the lives that were lost on there and when you look back, we don’t even have the absolute numbers seems like every other year someone has passed away on there. I see other benefits that come with it, originally it was about safety of people, and now I want people to enjoy what the delta has to offer, the loons, otters, and ducks”.

More than 40 people have died on the CP Rail tracks that form the only direct connection between Salmon Arm and First Nations lands to the west. Despite the risk, many people prefer to take the shorter train route than the Trans-Canada Highway.

The City of Salmon Arm included the connector and recreational trail in its Greenway Strategy, official community plan, and corporate strategic plan in 2011. And multi-use trails within communities and along the foreshore have been included in Adams Lake and Neskonlith land-use plans. The Mayor of Salmon Arm, Alan Harrison, said, “We appreciate this partnership with our Indigenous neighbours, to help move us one step closer to realizing a regional trail system around the bay and westward to Tappen and beyond.”

Given the extensive use of the foreshore trail connecting Salmon Arm and Raven, the West Bay Trail is expected to be popular with residents and visitors.

Next steps in building the trail will be sourcing funds to support planning, including archaeological, cultural and environmental assessments.

The public is invited to join us at 1:00pm on Friday, January 31st at Pierre’s point to witness this momentous occasion. 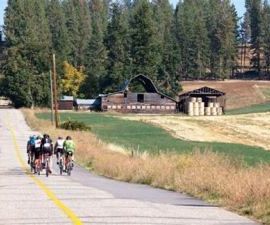 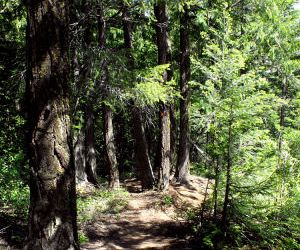 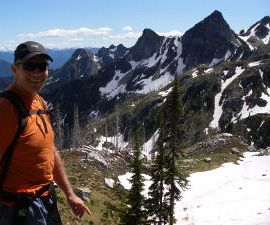 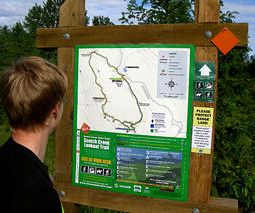